The Bullet Trick by Louise Welsh

Louise Welsh was born in London, England on 1 Februaury 1965.  She is now based in Glasgow, Scotland where she studied history at Glasgow University.  She then established a second-hand bookshop, where she traded in books for many years.

Her first novel was The Cutting Room which won several awards, including the 2002  John Creasey Award, by the Crime Writers’ Association.  Also, it was jointly awarded the 2002 First Book of the Year Award by the Saltire Society Scottish. Ms Welsh was granted a Robert Louis Stevenson Memorial Award in 2003, a Scotland on Sunday/Glenfiddich Spirit of Scotland Award in 2004, and a Hawthornden Fellowship in 2005.  She is a highly acclaimed writer.  In addition to this, Ms Welsh works as a radio broadcaster.  She has also published many short stories, and contributed articles and reviews to many British newspapers. She has written for the stage too.

Louise Welsh made a considerable mark with that first book  The Bullet Trick is her second novel. It was book of the month in my book group ans is a highly entertaining, and sometimes confusing story.  The fiction is eccentric and unabashed.  The author does not shy away from presenting the reader with the  extreme forms of human behaviour. 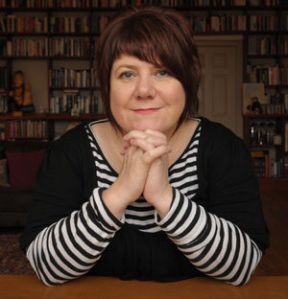 The Bullet Trick starts in Glasgow.  In this novel, the protagonist is a Glaswegian conjurer who has seen better days. The author has christened her anti-hero William Wilson.  This is the same name that Edgar Allen Poe chose for his hero in a story about sinister duality.   (It was also the name of the Professor at Edinburgh University who taught me Mercantile Law.  It is not a very unusual name in Scotland, but there may be a connection with Poe!)

In Welsh’s book, Wilson is desperate to escape from his boring existence in Glasgow.  He jumps at the chance to perform his conjuring tricks in the cabarets of Berlin. This allows him to leave people behind who he wants out of his life.  The changes he experiences in this free and easy foreign city seems like the best move of his career. But Welsh implies that Wilson’s problems really lie within himself.  The external danger he encounters show a manifestation of the sickness in his own soul.  Nevertheless, The Bullet Trick is not a depressing read at all. 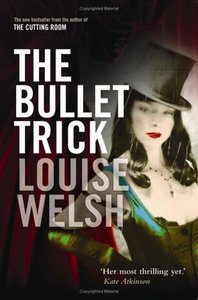 This book is plotted and full of flamboyant characters.  Welsh’s second novel is also quite different from her first.  That alone marks her out from many of her contemporaries.  However, although this is a story that shoots for the gothic and carnivalesque, it did not quite hit the mark for me.

The story of William Wilson switches between Glasgow, London and Berlin.  He is a magician on the last leg of a faltering career. Then, his old friend asks him to do a show in a London strip club.  However, what happens during the show drags Wilson into the violent aftermath of an old missing person’s case.   The author describes Wilson’s burlesque underground world very well.  The quirky showmen and drifters he meets along the way are interesting, but not memorable.

Louise Welsh’s writing style is playful and the language is alluring.  The real disappointment is William Wilson’s eventual show-down with the killer.  William Wilson is a rather unlikely hero. I found this to be an interesting read and it is well written. However, it is not for the prudish. Otherwise, It is worth reading.