Charles Philip Newkey Burden (Charlie Burden) is a British author and journalist who was born in 1973.   He has written biographies of many famous people including Justin Bieber and Amy Winehouse.  I bought this book by him, Sir Alan Sugar, The Biography when it was withdrawn from circulation and sold for 10pence UK/15cents US.  I was robbed!  This is a truly dreadful book.

Sir Alan Sugar, The Biography does tell of Alan Sugar’s rise from relatively modest beginnings to his current day fame and fortune.  However, there is little in the book that could not be found in Who’s Who, Wikipedia and newspaper articles.  I had hoped for something inciteful, different and interesting.  That was not to be found here.

The book swings between factual timeline and sycophantic clap trap that I doubt Alan Sugar (now Lord Sugar) would have any time for.

In case you do not know, Alan Sugar left school without qualifications and worked hard, first for others and later for himself.  He has always been good at spotting business opportunities. He established the computer company Amstrad within five years of leaving school.  The company made Alan Sugar a great deal of money when it floated on the stock exchange. 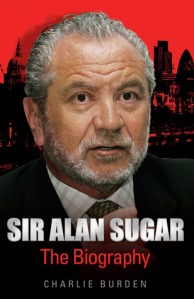 Alan Sugar also had a rather painful flirtation with “the beautiful game” when he was chairman of the London, England, football club Tottenham Hotspurs for a few years. However, today, the man who is now Lord Sugar is probably best known as a business adviser to the British Government and as the unlikely television star of the British version of The Apprentice.  He is also, unsurprisingly, named in the Sunday Times Rich List.

I have no doubt that this kind of book makes Charlie Burden a great deal of money, because of the name of the subject of the biography. I, for one, am glad I did not pay full price for it.  I cannot recommend it, except, perhaps, to prop up a table if you have one that wobbles.