I enjoy Michael Connelly’s crime novels and recently picked up Nine Dragons fron a charity shop to read on a holiday. Nine Dragons is the 14th novel in the Harry Bosch series and the 22nd book by American crime author Michael Connelly. It was published by Little Brown and Company in the U.K. and Ireland on October 1, 2009. Michael Connelly is an American author of detective novels and other crime fiction, notably those featuring LAPD Detective Hieronymus “Harry” Bosch, which are my favourites.

In Nine Dragons, I particularly liked the human aspect at the beginning of the novel. 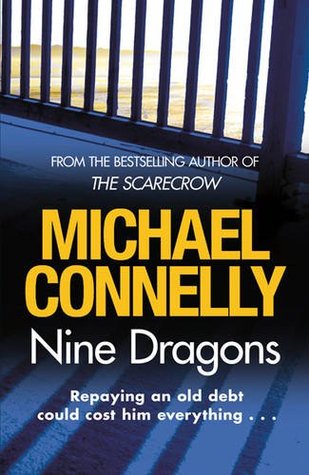 Harry is called to the small Fortune Liquors store which is in a tough part of Los Angeles. The owner, John Li has been shot dead. Harry has known Mr Li for many years and is personally affected by the death.  One of the great advantages of a series novel is the instant rapport you have with a character where you have read the previous work and that helps this book get off to a tremendous start as you instantly know where you stand with Harry Bosch.

However, in the case, Harry is required to bring in a detective from the Asian Gang Unit for help with translation of languages and also of the cultural norms and expectations that guided Li’s life.  Harry uncovers a link to a Hong Kong triad, a lethal and far-reaching crime ring and receives a picture of his daughter, who lives in Hong Kong, tied to a chair. He then gets a frightened message from her and leaves for Hong Kong to help his ex-wife rescue the girl. Bosch puts aside everything he knows and risks everything he has in a desperate bid to outmatch the triad’s ferocity.

Once the action transfers to Hong Kong the pace of the story is very satisfying indeed. The author could have concluded on the return to Los Angeles but the fact he did not lifts the novel out of the ordinary.

I really enjoyed this book and highly recommend it to others who enjoy Michael Connelly novels.