Me and my Writing by guest author Sue Barnard

Sue Barnard is a most talented writer, poet and editor, so I am honoured that she has taken time out of her busy schedule to visit my blog and write about her writing career. Over to you, Sue.

For someone whose main passion is writing, I suppose it’s strange to recollect that in the early days it was something I dreaded. Those awful compulsory “Composition” exercises at primary school are a fine example of how being forced to do something as a child can all too easily result in being put off it for life. It was only during my final year at primary school, when I won a competition for writing an essay about chocolate, that I realised it might have some merit after all.

Even so, for many years after that, I never considered myself a writer. Although I enjoyed pottering about with poems, short stories, articles for the parish magazine, and the occasional stroppy letter to The Times, that was as far as it ever went – until a life-changing event in 2004 forced me to begin taking my writing much more seriously. At that point I took a few courses in Creative Writing (some with the Open University, others run by other writers who have since become close friends). These courses also provided a valuable bonus in the form of teaching me how to critique and edit other writers’ work, and this was to stand me in good stead when I subsequently applied to become an editor. But at that stage I still had no thoughts of writing a full-length novel. That milestone appeared a couple of years later, when I came across one of those lists of Things You Must Do Before You Die. Most of them were pretty underwhelming, and in any case I’m not planning on dying any time soon – but the one which leapt out at me was Write The Book You Want To Read.

In the thirty-odd years since I first saw Franco Zeffirelli’s amazing film of Shakespeare’s Romeo & Juliet, I’ve often wondered why the world’s most famous love story should also be the most heartbreakingly tragic. The book I’ve always wanted to read is the alternative version of the tale – the one which gives the young lovers the happy ending which was denied them in the original story. Why, I asked myself, should there not be such a book? And the answer came straight back: Why not indeed? And if it doesn’t already exist, then go ahead and write it.

The eventual result was my debut novel The Ghostly Father, first published by Crooked Cat Books in 2014, and revised and re-released in 2018. I was originally writing it just for myself, because it was the ending I’ve always wanted, but judging by the number of people who have bought it, read it, and been kind enough to say they’ve enjoyed it, it appears that I’m not by any means the only person who prefers the alternative ending. 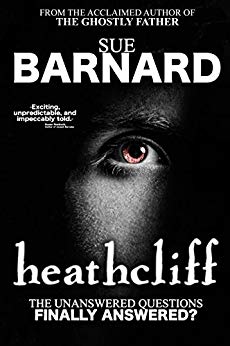 My most recent novel, Heathcliff, was also inspired by one of the great classics: Wuthering Heights. It was published by Crooked Cat Books on 30 July 2018, to coincide with the bicentenary of the birth of Emily Brontë, and speculates what might have happened to her famous (or infamous?) anti-hero during the three years when he disappeared from the original story.

I also love writing poetry, which is a totally different discipline from writing prose. Poems rely much more on form and structure, and as they are generally much shorter than novels (though not always; cough-Hiawatha-cough), every word has to earn its keep. As with my novels, I often draw inspiration from existing works – and in 2013 one of my efforts was fortunate enough to win a major poetry award. This is that poem:

(with profuse apologies to John Masefield)

gliding around Waitrose with a leisured ease,

with a cartload of oysters, mussels, truffles,

trudging around Sainsbury’s on her homeward way,

with a cartload of pasta, chicken, houmous,

dashing around Tesco in her faded jeans,

with a cartload of cider, Cheddar, pizza,

Sue Barnard is a British novelist, editor and award-winning poet. She was born in North Wales but has spent most of her life in and around Manchester. After graduating from Durham University, where she studied French and Italian, Sue got married then had a variety of office jobs before becoming a full-time parent. If she had her way, the phrase “non-working mother” would be banned from the English language.

Sue has a mind which is sufficiently warped as to be capable of compiling questions for BBC Radio 4’s fiendishly difficult “Round Britain Quiz”. This once caused one of her sons to describe her as “professionally weird.” The label has stuck.

In addition to working as an editor for Crooked Cat Publishing, Sue is the author of four novels: The Ghostly Father, Nice Girls Don’t, The Unkindest Cut of All and Never on Saturday.

She is also very interested in Family History. Her own background is far stranger than any work of fiction; she’d write a book about it if she thought anybody would believe her.

Sue lives in Cheshire, UK, with her extremely patient husband and a large collection of unfinished scribblings.

NOVELS: The Ghostly Father  Nice Girls Don’t  The Unkindest Cut of All  Never on Saturday  Heathcliff

POETRY: Variations on an Apology