The Good Daughter by Karin Slaughter

I have read several books by Karin Slaughter and enjoyed them so I was looking forward to The Good Daughter coming to the top of my TBR list. The book is a stand alone rather than being part of a series. It took me a while to get into the minds of the characters and to understand the storyline. Had the book not been by an author I was familiar with, I probably would not have persevered, but that would have been a mistake. It is an interesting story.

It tells the story of two sisters who witness their mother’s murder then are forced into the woods at gunpoint. One runs for her life. One is left behind. The Good Daughter is set in a small town a place where everyone knows every one else–or thinks they do, and at times that can be rewarding and at other times can be incredibly stifling. 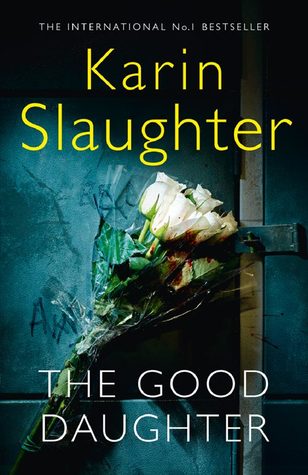 It starts shortly after the Quinn family have had to move into a new home when their family home is attacked and razed to the ground by arsonists. The daughters, Charlotte and Samantha Quinn’s, witness their happy small-town family life being torn apart by this terrifying attack on their family home. Soon after the family has moved into their new accomodation, the higglety-pigglety farm house, they suffer another attack.

This one leaves their mother dead and their father, a notorious defense attorney, devastated. It also left the family fractured beyond repair, consumed by secrets from that terrible night.

Twenty-eight years later, Charlotte has followed in her father’s footsteps to become a lawyer in the town herself: the ideal good daughter. However, violence comes to Pikeville again, and a shocking tragedy leaves the whole town traumatized. This time Charlotte is plunged into her own nightmare. She is the first witness on the scene, but it’s a case that unleashes the terrible memories she’s spent so long trying to suppress. She calls Samatha for help because the shocking truth about the crime that destroyed the family nearly thirty years ago won’t stay buried forever.

Karin Slaughter is one of the world’s most popular and acclaimed storytellers. Published

in 120 countries with more than 35 million copies sold across the globe, her eighteen novels include the Grant County and Will Trent books, as well as the Edgar-nominated Cop Town and the instant New York Times bestselling novels Pretty Girls and The Good Daughter. Slaughter is the founder of the Save the Libraries project—a nonprofit organization established to support libraries and library programing. A native of Georgia, Karin Slaughter lives in Atlanta. Her Will Trent series, Grant County series, and standalone novel Cop Town are all in development for film and television.