Antiques and Alibis by Wendy Jones was in the middle of my TBR pile. Therefore, I was delighted when she and her publishers, Scott and Lawson, arranged a blog tour with Love Books Group Tour and I had an excuse to move this new novel to the top of the list. My favourite genres of books is crime and I particularly enjoy reading the work of authors that are new to me. so this was a treat.

Cass Claymore, a red headed, motorbike riding, ex-ballerina inherits a Detective Agency, and accidentally employs an ex-con dwarf and an octogenarian. Hired by a client who should know better, Cass has no leads, no clue and a complete inability to solve a case. Still a girl needs to eat and her highbred client’s offering good money. Join her as, with bungling incompetence, she follows a trail littered with missing antique teddies, hapless crooks, a misplaced Lord of the Realm and dead bodies. Will Cass, and Scotland, survive?

https://amzn.to/2D3GT42
My Review
Antiques and Alibis was the first book I had read by Wendy H Jones, although I had heard good things about her novels. I was pleased to come in at the beginning of this series featuring the new heroine Cass Claymore.
I have to admit that when I first read the main protagonist was a motor-bike riding, former ballerina who had inherited a Private Detective agency from her late uncle, I did wonder if this character had been created with the help of an on-line character generator. I was also concerned that there were also echoes of Where the Bodies are Buried where an aspiring actress works in her Uncle’s detective agency, but I needn’t have worried. Antiques and Alibis is an imaginative novel writen in a unique voice with wit and humour. When you add in the enormous dog, the dwarf assistant and the aged grandfather, it all adds up to a most entertaining read.
The main charater of the book is Cassandra ‘Cass’ Claymore, the ginger haired owner of her the private detective agency set up by her uncle. This coincided with her forced retirement as principal dancer for the Royal Ballet due to a drunk driver who damaged her knee. So she now indulges her other first love: motorbikes. She has a black Yamaha.
Her interactions with the people she meets are so sharp and engaging. I loved her as a character and also her dwarf companion and employee Quill.
Quill is a soft spoken man who can charm the ladies and also has a few other skills Cass doesn’t want to know about. When you add these two together and set them to look for an antique Steiff Teddy Bear; a lost brother, whom no one truly misses except his sister, then you have the makings of a laugh out loud book. Along the way you meet Cass’s family, Quill’s acquaintances all of whom add to the general bonhomie of solving the mystery.
I was delighted by the originality of the writer’s voice in Antiques and Alibis. I found this a most entertaining read and highly recommend it. 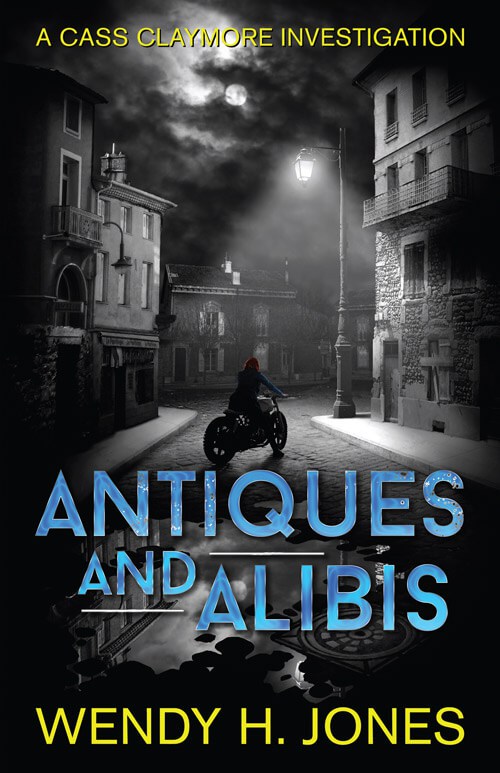 Award Winning Author Wendy H. Jones lives in Scotland, and her police procedural series featuring Detective Inspector Shona McKenzie, is set in the beautiful city of Dundee, Scotland. Wendy has led a varied and adventurous life. Her love for adventure led to her joining the Royal Navy to undertake nurse training. After six years in the Navy she joined the Army where she served as an Officer for a further 17 years. This took her

all over the world including Europe, the Middle East and the Far East.

Much of her spare time is now spent travelling around the UK, and lands much further afield. As well as nursing Wendy also worked for many years in Academia. This led to publication in academic textbooks and journals.

Killer’s Countdown is her first novel and the first book in the Shona McKenzie Mystery series. Killer’s Crew won the Books Go Social Book of the Year 2107. There are now six books in this series with Killer’s Crypt being released in August, 2017. The Dagger’s Curse is the first book in The Fergus and Flora Mysteries for Young Adults. This book is currently shortlisted for the Woman Alive Magazine Readers Choice Award Book of the Year. She is also a highly successful marketer and she shares her methods in the book, Power Packed Book Marketing.

Do enjoy the rest of Wendy’s tour> 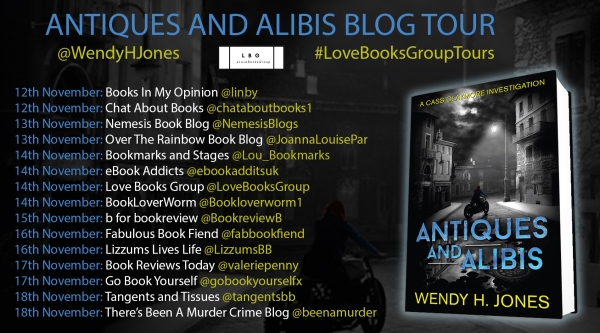