My Writing and me by guest author Jane Lacey-Crane

I am happy to introduce my friend and fellow author, Jane Lacey-Crane today. She is taking time to tell us about her journey towards becoming a published novellist. Read her interesting story now. 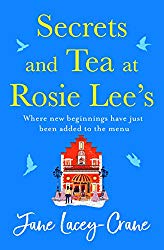 After the release of my first novel, ‘Secrets and Tea at Rosie Lee’s’, in May 2018, it’s fair to say that I was on a bit of a high. After years of false starts and life getting in the way, I’d finally achieved a long-held dream. I’d wanted to be a writer for as long as I could remember and now I was. Finally, I’d cracked it – I’d written enough words to complete a full-length manuscript – all I had to do now was write some more! My contract with my publisher is for three books – so, one down, two to go. This should be easy, I thought, I’ve done it once before, I just needed to get on with it. And then everything stopped. I couldn’t find the words, I had nothing to say and what I did have sounded trite and unimaginative. I quickly realised that ‘Second Book Syndrome’ is a real thing and I was suffering from it badly.

‘Book One was obviously a fluke,’ I would tell myself, as I sat staring at the cursor flashing on a blank page. ‘I need to let my poor editor know that her faith in me was totally misplaced, it’s obvious that I can’t do this.’

It was only after speaking to some wonderfully supportive fellow writers, that I cam to understand that my blind panic and total lack of confidence, were totally normal. We all feel like frauds, we all feel like one day someone will tap us on the shoulder and say, ‘Excuse me, there’s been a mistake, we never meant to offer you a three-book deal since you aren’t even capable of writing a shopping list, let alone a novel.’

But gradually, with lots of support from my fellow authors, many of whom listened to me whinge about the pain of writing a second book for weeks and weeks, I felt more confident – and I began writing the story of Evie, a widow trying to seize her second chance at life. She’s unsure of what the future holds and in the midst of this uncertainty she meets an old friend; a man who is now a famous movie actor and all-round sex symbol! It’s loosely based on something that happened to me – but I’m not naming any names!

It’s true what they say – you never know when inspiration will strike – in my case it was in a packed cinema in Peterborough, over a giant tub of popcorn – but I’m very glad I eventually found my way out of the writing desert! ‘City of Second Chances’ will be published some time in early 2019. And then the whole process of writing a new book begins all over again. Wish me luck!

Jane has reached the age now where she no longer tells people her age! She’s old enough to legally be able to do everything and that’s all that matters. ‘Secrets & Tea at Rosie Lee’s’ is Jane’s debut novel. Born and brought up in London’s East End, she now lives in Lincolnshire with her family. Thankfully she recently discovered the joys of mail order pie, mash & liquor, so she can relive her youth anytime she feels like it!

Although writing stories was something that Jane had always done, she never thought anyone would pay her to do it so she focussed on learning to act instead, figuring that this was a much more reliable way to earn a living. Sadly, her career as an actress was shortlived, actually it was non-existent, so she turned her attention to another reliable line of work – Cable Television! This was where Jane managed to finally get paid (badly!) doing something she enjoyed – writing. She began with scripts for a series all about Serial Killers (imaginatively entitled ‘Serial Killers’) and then moved on to a series of history documentaries. This series never saw the light of day in the UK but Jane has been informed that it used be very popular with insomniacs staying in hotels in the Far East. This may or may not be true.

She is currently working on her second contemporary novel for Aria Fiction.