One Hot Summer by Kat French

I picked up One Hot Summer by Kat French when it was sold as excess stock by my local library. This novel falls squarely within the Chick-Lit category and it is great fun: indeed quite steamy in parts! 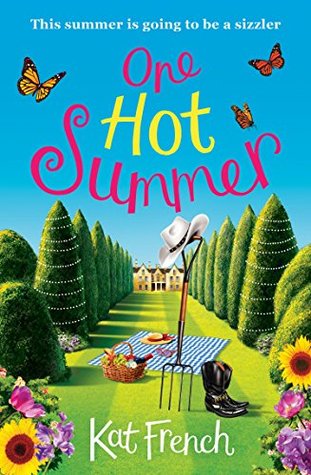 The main protagonist, Alice, separated from her actor husband, Brad, after he cheated with his co-star, Felicity. She stills lives in their lovely home, Borne Manor, but cannot afford to keep it without finding a way to raise some extra cash. She finds a very inovative way to do this as she when she decides to rent out the house while she lives in a caravan at the bottom of the garden.

Her tenant, Robinson, also has his problems. Robinson is also separated from his spouse, Lena. He is an incredibly famous coutnry and western star from the USA who has lost his enthusiam for his career.

Robinson and Alice seem to rub each other up the wrong way, at first. However, as they gets to know each other, their relationship developes and they become an item. The reader gets to know, not only Alice and Robinson, but the other enightbours in the village, but also Brad, Felicity and Lena. It is an eclectic mix of characters who are in turn funny, irritating and warm.

I enjoyed One Hot Summer far more than I thought I would and think it would make an excellant book group book.

Kat French is a British author who was born and raised in the heart of the Black Country, where she still lives with her husband, two little boys and the oldest cat in the world. She grew up with a healthy obsession for books, and several years ago she promised her husband she would write novels if Santa gave her a macbook for Christmas. It’s a promise she is very glad to have kept.