The Brotherhood: A Psychological Thriller by J.L.Fenton

I recently had an opportunity to read The Brotherhood: A Psychological Thriller by J.L.Fenton. She is a new author to me and I do enjoy exploring the work of different authors. Also, readers of this blog will be aware that crime thrillers are my favourite genre.

This book had me hooked from the very beginning: the imagery of the lone magpie filled me with anticipation for what was to come. However, almost immediately The Brotherhood took a different route from that which I had expected.

The story revolves around Melissa who struggles greatly after her parents’ sudden death. As many people do, she renewed her devotion to her faith but it is not long before Melissa ends up leaving her old life behind. She finds herself in the countryside, living within the confines of The Brotherhood. The leader of the sect, Dominic, is carismatic and charming. Melissa does not take long to fall under his spell.

The novel is carried along by crackling dialogue, vivid descriptions and credible characters. The author treats her reader to the thrill of expectation throughout this psychological thriller. The reader knows this is all going to turn sour, but not how or when.

Then engineer Mark joins The Brotherhood and we hope for better things for Melissa as her feelings for her develop. But her affection for Mark conflicts with her hero-worship of Dominic, and it is clear that in The Brotherhood is not as safe as Melissa had thought it would be.

As the story develops, Melissa and Mark grow closer. But her haven soon begins to feel like a prison and Melissa’s newfound happiness with Mark is destroyed by Dominic’s jealousy. She must find a way to regain her freedom with Mark.

This is an excellent debut novel that would be a fine choice for a book club. 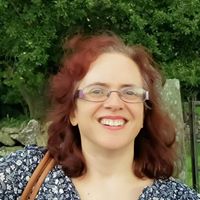 Jo Fenton ia an exciting new voice in crime fiction. She grew up in Hertfordshire. She devoured books from an early age, particularly enjoying adventure books, school stories and fantasy. She wanted to be a scientist from aged six after being given a wonderful book titled “Science Can Be Fun”. At eleven, she discovered Agatha Christie and Georgette Heyer, and now has an eclectic and much loved book collection cluttering her home office.

Jo combines an exciting career in Clinical Research with an equally exciting but very different career as a writer of psychological thrillers published by Crooked Cat Books. When not working, she runs (very slowly), and chats to lots of people. Jo lives in Manchester with her husband, two teenage boys, a Corgi and a tankful of tropical fish. She is an active and enthusiastic member of two writing groups and a reading group.