I first met Jennifer C. Wilson over a year ago at the writers’ inspiration the is The Swanwick Writers’ Summer School. Although she was already a published author, she is such an open, friendly person who works to nurture aspiring authors. It is hard to remember that Jeniifer is a marine biologist by training, who developed an equal passion for history whilst following the life of Mary, Queen of Scots on while on family holidays as a child. 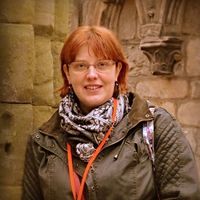 workshop. She then won the Story Tyne short story competition, in 2014. Her debut novel Kindred Spirits: Tower of London was published by Crooked Cat Publishing in October 2015. I very much enjoyed that book and was delighted when the sequel came out in April 2017. It is set in Edinburgh, Scotland, in and around the Royal Mile and follows Mary, Queen of Scots as she re-visits her subjects in her spiritual form.

I lived in Edinburgh for many years and know the city well. I found the descriptions of the city vivid and evocative and the story wove them together really well. The author creates interesting issues for Queen Mary’s ghost as well as for those of her ghostly court and subjects.

The story starts during the Edinburgh International Festival, in August when author takes the reader up and down Edinburgh’s historic Royal Mile. Royalty and commoners,

ghostly and human, exist together mingling together in the museums, cafes and former royal residences. From Edinburgh Castle on the extinct volcano that is Castle Hill to Holyrood Palace on the Abbey Strand, the reader will find is far more going on than meets the eye, in Kindred Spirits –  The Royal Mile. The author introduces ghosts of every era and background who make their home in the City.

We first meet Mary, Queen of Scots returning to the city for her annual visit. She is troubled by the lacklustre attitude of her father, King James V of Scotland, and decides to do something about it, with the aid of her ghostly accomplices. However, in death, as in life, her second husband, Lord Darnley is still a thorn in her side.

Kindred Spirits: The Royal Mile, published by Crooked Cat, is a good story with a great setting. It would be an excellent Book Club choice and I heartily recommend it.