The Fear Index by Robert Harris

I enjoy books by Robert Harris and was delighted when The Fear Index was recently book of the month at my book group. Ths novel deals with the world of finance, at its worst. The hero of The Fear Index is a brilliant physicist called Dr Alex Hoffman who seems to lack empathy with those around him.

He is frustrated by a thankless research job at Cern’s Large Hadron Collider in Switzerland, so teams up with a suave investment banker with persuasive people skills to create a hedge fund on the banks of Lake Geneva.

The unique point about this hedge fund is that it makes decisions based not on human interaction but on predictions derived from a complex computer programme. For a long time, the computer can do no wrong. Hoffman is soon living a life of empty luxury in

Geneva: he estimates his personal wealth to be “one billion, ballpark”, he lives in a $60m lakeside house, and is married to Gabrielle, a beautiful artist, with whom he seems to have little in common.

Then an intruder breaks into Hoffman’s home and assaults him, injuring his head. This sets in motion a spiral of paranoia and violence that leaves our hero questioning the cause of it all and his computer programme tries to leave the world of probability behind by predicting fear as a motivation, and then uses this information to short-sell stocks. Indeed, the premise proceeds on the basis that Hoffman’s computer predicts not only volatility but also pinpoints when investors will stop acting rationally and fear will take over. 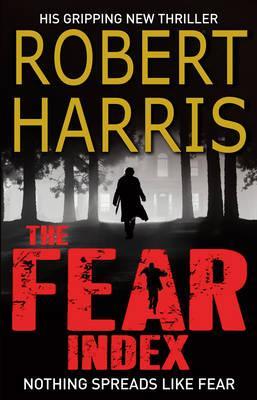 This is where, for me, Harris goes one step too far. For the past 25 years I havebeen aware of finance houses hoping to predict stocks based on chaos theory, artificial intelligence, neural network and real-time linguistic search. They’ve had very little success.

Harris is a master of pace and entertainment, and The Fear Index is a thoroughly enjoyable book. A lot of research has gone into it – from the rare-book market to hedge fund investors – and I enjoyed The Fear Index. I recommend it and have no doubt that I will read other books by Robert Harris.