I enjoy Quintine Jardine’s series of crime thrillers featuring his character, Bob Skinner. In Private Investigations, the 26th Skinner novel. The character has retired from the Scottish Police Force and now works as a private investigator after a thirty-year police career. Bob Skinner is on the way to answer a friend’s plea for help when a freak accident gives him an unwelcome glimpse of the dark side.

I have read most of the “Skinner” books, starting from the first one published back in the early 90s when I lived in Edinburgh. Now I have moved away, but I am always drawn to books about southern and central Scotland.

Eden Higgins is Bob Skinner’s first client. Eden, the brother of an ex-girlfriend of Skinner, wants him to look into the police investigation into the theft of his very expensive, luxury yacht. The police were unable to trace the very large yacht and the insurance company are refusing the pay out the full amount. On his way to meet Higgins, Bob’s car is bumped by another as he is reversing from a parking space. The driver of the other car leaves the vehicle and runs off immediately on foot. Chasing him is no longer an option for the aging Skinner, who finds the body of a young girl in the boot of the car. As a result of this find, Bob becomes involved in both cases. 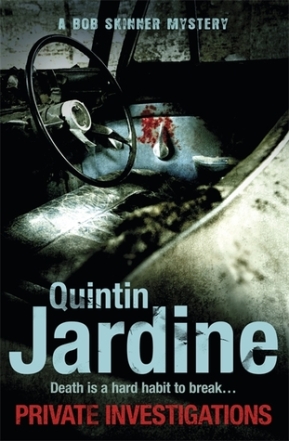 There are many twists and turns in Private Investigations where each chapter brings new developments in one or other of the cases. There is reference to the changing Police Force set-up we have faced in Scotland over recent years and this fits with the bigger picture of Skinner’s backstory and the tension between him and some of his ex-colleagues. Quintin Jardine leads the reader through the investigations and brings each character to life with enough backstory that even if you have never read any other “Skinner” book you should be able to relate to the characters and the personal and professional relationships they share with Bob Skinner. But I was not as engaged by Private Investigations as I have been by most of the other Skinner crime novels that I have read. Nevertheless, I recommend this police procedural novel.