None But The Dead by Lin Anderson

Lin Anderson is, without doubt, the queen of Tartan Noir. None but the Dead is the 11th crime novel she has written featuring the forensic expert, Rhona Macleod. The story is set on Sanday,  one of Britain’s northerly islands in the Orkney archepelego. It is inaccessible when the wind prevents the ferry from the mainland crossing, or fog grounds the tiny island hopping plane. A place with its own customs and where everybody knows everybody else, even the incomers. 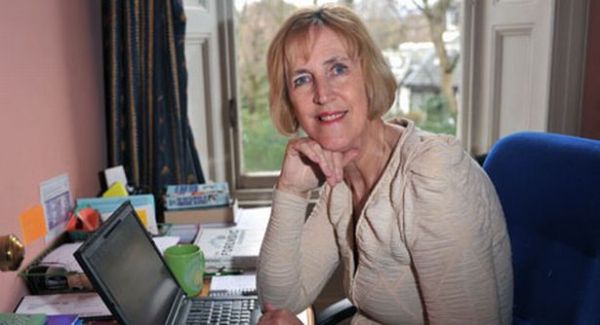 Human remains have been discovered by an incomer, during the renovation of the old school house, so forensic scientist Dr Rhona Macleod and her assistant Chrissie are brought in to evacuate the grave. They are presented with a series of unexplained incidents, apparently linked to the discovery of 13  magic flowers representing the souls of dead children who had attended the island school where the body was discovered. Of course, they call on the help of Professor Magnus Pirie.

In Glasgow McNab is investigating the suspicious death of an elderly man in his flat. It is when a link between the Glasgow death and the body on Sanday is suspected, that McNab volunteers to head North to investigate. However, he is esperately uncomfortable in such surroundings, he finds that none of the tools of detective work are there. No internet, no CCTV, and no police station.

Maclaod and McNab unearth secrets of various islanders and incomers are viewed with suspicion and anger. The plot of None But The Dead gives the reader many twists and turns. There are plently of surprising moments throughout the book and you cannot help but being drawn in by the compelling story. Lin Anderson researches her crime novels thoroughly: this ensures that they are as realistic as they possibly can be and the reader is treated to an exceptional read. I highly recommend None But The Dead.