My sister gave me The Collini Case by Ferdinand von Schirach as a Christmas present. I had not heard of the book nor the author. However she established her local book group and reads a lot. So I trusted her judgment and was sure this would be a book that I would enjoy. It is a murder mystery, but not in the traditional style.

The author was born in Munich, Germany, in 1964. By profession he is a lawyer as well as a writer. He studied in Bonn, Koln and Berlin before specialising in criminal law. The Collini Case was published in 2011. It reached no. 2 on the bestseller list of Der Spiegel. The book tells of the murder of the industrialist Hans Meyer, who had been a Nazi officer in Italy. It deals, controversially, with the sometimes excessively mild ways in which the post World War II justice system in Germany dealt with former Nazis. The Collini Case is a fictional account of a murder that took place in Berlin.

During World War II both Germans and Allies routinely shot civilians in reprisal for attacks on their armed forces. This question plagued the defence of an Italian man named Fabrizio Collini some sixty years later. This book by Ferdinand von Schirach  is based upon that historical trial.

Collini, who has lived in Germany since the 1950s, enters the luxury hotel suite of a man named Hans Meyer. They are near the Brandenburg Gate in Berlin. He shoots him from behind, repeatedly, and stamps in his skull until it no longer resembles a skull. He gets himself arrested, says that he did it. Motive unapparent. A young defence lawyer called

Caspar Leinen is given the case. It is his first.

The author describes the killing and post mortem with an eerie economy of words. He is quite clinical in his treatment of events. Even with Leinen’s lovemaking; the author flits between describing Leinen’s seduction and the view from the window.

However, the pace of the novel quickens towards its conclusion, but the first drama occurs early on. Leinen realizes that he knew the deceased and his family, and is now being asked to defend his killer. When the plan to get his client to confess to manslaughter fails, he proceeds to uncover any possible motives for murder. Collini is seemingly wholly unconnected to Hans Meyer. This is a tense  murder mystery. 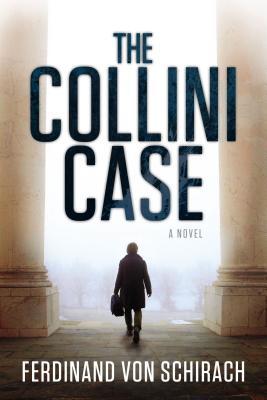 Perhaps it is because its secrets lie in the War and the German legal system of the mid twentieth century, or perhaps it is because the contemporary German legal system is so dramatically unlike the British legal system, but I found myself forgetting that Collini’s trial is set in the twenty-first century. As a character, Leinen would seem more at home in the 1930s. His daily routine is grey and timeless. For Leinen, for the prosecutor Mattinger, and possibly for the author, long hours in chambers may have precluded their full immersion in society. But that lack does contribute greatly to the oppressive, grey mood that prevails in the book.

This certainly is not a comfortable story, but it is an important one. von Schirach’s late grandfather was the Reich Youth Leader of the Nazi Party, and the Collini case clearly resonates on a personal, but also a more universal human level. I found myself sucked into the perturbations of justice this case unfurls. And like all the best murder mysteries, this one has a twist.

My sister made a great choice when she chose this book for me. It is an excellent novel. The translation from the German is fluent and seamless. I highly recommend The Collini Case.