The Return Journey and other Stories by Maeve Binchy

Several people had told me that Maeve Binchy was an excellent writer and told great stories with believable characters. So I was thrilled when her book of short stories The Return Journey and other Stories came up as the book to read on my book group. I had previously read one novel by Maeve Binchy, Full House, which is reviewed here: https://bookreviewstoday.wordpress.com/2015/04/06/full-house-by-maeve-binchy/. Although I did not enjoy that book very much, I was willing to give Maeve Binchy another try. She is a much respected writer.

Maeve Binchy Snell was born Anne Maeve Binchy on 28 May 1939 in Dalkey, Ireland. When when recording a piece for Woman’s Hour in London, England she met the children’s author, Gordon Snell, who was a freelance producer with the BBC. Their friendship blossomed into a cross-border romance, with her in Ireland and him in London, until she

eventually secured a job in London through the Irish Times. She and Snell married in 1977 and, after living in London for a time, moved to Ireland. They lived together in Dalkey, not far from where she had grown up, until Binchy’s death on 30 July 2012. The author was known as Maeve Binchy and was an Irish novelist, playwright, short story writer, columnist, and speaker best known for her sympathetic and often humorous portrayal of small-town life in Ireland. Her readers often speak about her descriptive characters, her interest in human nature, and her often clever surprise endings. Her best selling novels were translated into 37 languages and sold more than 40 million copies worldwide. There is no doubt that Maeve Binchy is one of the world’s favourite storytellers.

The Return Journey and other Stories is a book of short stories, not a novel. As might be expected, I enjoyed some of the stories more than others.  The book is several small sections, each with its own set of characters who never meet 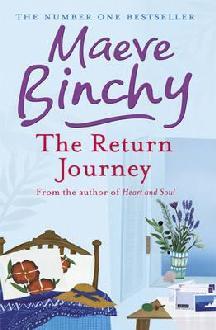 up or connect with the next story’s set of characters. In fact, each story seems unfinished. You meet the character or characters, something happens to set the story in motion, and just as you get to the climax of the story where you expect the conflict to start resolving, it moves on to the next story, the characters of the last never to be heard from again. All the stories are tales about travel: people going somewhere, people returning from somewhere, people in the middle of their journey, people just trying to get started.

I did enjoy the story where a pair of star-crossed travelers pick up each other’s bags, and then learn that when you unlock a stranger’s suitcase, you enter a stranger’s life. I also enjoyed the story about a spinster who watches other lives only to find her happiness late in life realizes just how unhappy she could have been if she had led a more typical life. Another story tells of a housewife who retains the service of a house-sitter finds that her life is missing something, she sees a glimpse of what it could be and never quite recovers her happiness. Again a secretary’s silent passion for her boss meets the acid test on a business trip. The reader learns whether she adores him as much when she knows him better.

In the  more poignant, ironic and sometimes humorous stories, The Return Journey walked the reader through the lives of many people sometimes their interaction was indirect and accidental, sometimes it involves a compassionate gesture that is accepted. However, on the whole, these were not my kind of tales. I doubt that I would seek out another book by Maeve Binchy.