Karin Alvtegen is a Swedish author of crime fiction. She was born on 8 June 1965 in Huskvama, Sweden. Alvtegen’s psychological thrillers are generally set in Sweden. Four of her books have been translated into English: Missing, Betrayal, Shadow and Shame. She has been nominated for the Edgar Award for Best Novel and the  CWA International Dagger and  is seen as The Queen of Crime in Scandinavia, She lives in Stockholm. She is grand-niece of the popular children’s novelist Astrid Lindgren. I loved those Pippi Longstocking books as a child but Betrayal was the first of  Karin Alvtegen’s novels that I had read.

The story tells about Eva and Henrik who have been living together for fifteen years. They have a son together but Eva discovers that her husband is seeing another woman. So, she decides to seek revenge. Also, a young man, Jonas, has for the past two years been sitting by a hospital bed where his girlfriend lies in a coma after an accident.

He yearns for closeness with her but she keeps letting him down by refusing to wake up. Betrayal deals with how devastating it can be to be let down and how our destructive actions create consequences far beyond our control. Two dark agendas intersect to create something more volatile than they would have been apart. This is definitely one of creepiest books I have ever read and I really enjoyed that. The author takes one concept, that of betrayal, and builds upon that to create a story that is unnerving. 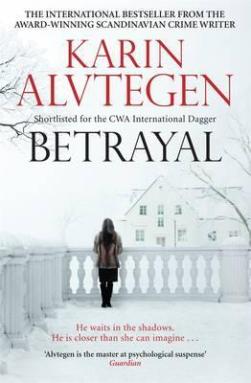 The destiny of Jonas and Eva is the consequence of other people’s actions and it is by chance that the roads of these two people cross.

The repercussions of all this play out over the rest of the book. I think that this book makes an impact because so much of the internal dialogue that we hear in the book hits close to home. It deals with things like the nature of relationships, trust, deceit and how people view love. The author then throws a misunderstood mind or two into the equation, along with an unbalanced one so the reader has a recipe for a real nail biter.

I found myself rooting for the book to end one way, but the author moved determinedly in another direction. It was an excellent read. I still get the shivers just thinking about it.