Fever Of The Bone by Val McDermid 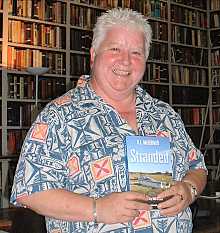 Val McDermid is one of my favourite authors from the UK. I have never met her, but her work speaks for itself. I have reviewed other books by her on this site: https://bookreviewstoday.wordpress.com/2014/01/23/beneath-the-bleeding-by-val-mcdermid/, https://bookreviewstoday.wordpress.com/2014/02/20/killing-the-shadows-by-val-mcdermid-3/. She is a No. 1 bestseller whose novels have been translated into more than thirty languages, and have sold over eleven million copies. McDermid has won many awards nationally and internationally, including the CWA Gold Dagger for best crime novel of the year and the LA Times Book of the Year Award. She was inducted into the ITV3 Crime Thriller Awards Hall of Fame in 2009 and was the recipient of the CWA Cartier Diamond Dagger for 2010. In 2011 she received the Lambda Literary Foundation Pioneer Award. This is a respected author of note who writes full time and divides her time between Cheshire, England and Edinburgh, Scotland.

Fever of the Bone is the sixth novel in her Tony Hill series which was the inspiration for the hit British television show Wire in the Blood. Psychologist Tony Hill and Detective Carol Jordan’s investigate the murder of a teenage girl and this leads them to an Internet predator. All Val McDermid’s Tony Hill books involve a series of murders committed by an unknown assailant that Tony’s usefulness as a profiler will assist in solving. There is also an ever present will-they-won’t-they tension between Tony and Carol Jordan. So, every time I read an installment of this series I find myself more drawn into the story than ever

The why dunnit is a bigger question than the who dunnit in this book. Once the reader has been given the answer, they do not feel cheated, because all the pieces are there, even if they do not predict the answer. Fever of the Bone also has a nicely drawn subplot in which Tony finds out more about his father. It was extremely well done, and the ending poses some interesting possibilities for McDermid to address in following books.

I really did enjoy this book. I have not read a book by Val McDermid that I have not enjoyed. If you like a tightly written thriller, I highly recommend this book.