My Scotland, Our Britain by Gordon Brown

Many years ago I was at a conference in London, England and had an opportunity to hear a speech given by Special Peace Envoy (then Prime Minister of Great Britain) Tony Blair. I am not a particular fan of his, however, I do recognise that, for good or ill, he is a world name. Therefore, I took the chance to hear his speech. He is an outstanding orator. Therefore, now that I am out of the rat race and live quietly in a little village, I noticed with some interest that Mr Blair’s successor in office as Prime Minister of Great Britain, Gordon Brown, was going to be speaking in the nearest town. I wanted to hear Mr Brown too.  He was appearing with Katy Clark, MP and Johann Lamont, leader of the Labour Party in Scotland. I did not expect much.I was surprised by the quality of the speeches. Gordon Brown is also a fine orator and a passionate Speaker.

I decided not to review this book until after the results of the Scottish referendum. My Scotland, Our Britain: A Future Worth Sharing is a highly personal account of Gordon Brown’s Scotland, the nation he was born in, and our Britain, the multinational state that the Scots, English, Welsh and Northern Irish have created and share. 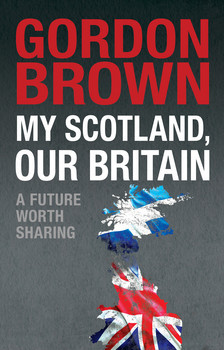 I grew up around the same time: partly in Scotland and partly in the USA so I found it most interesting when Brown took time to explain the influence of religion, education and Scotland’s unique industrial structure on the shaping of his own and also Scotland’s identity.

He sets out the dramatic economic, social and cultural changes of the past fifty years and the vastly different prospects his children will face, demonstrating that a sense of Scottish national identity has always remained strong and how Scottish institutions have always fiercely and successfully guarded their independence. This is important to the Scottish success. Also important, however, is the strength gained from the support to Scotland of being part of Great Britain.