The Twilight Time by Karen Campbell

The Twilight Time was book of the month at my book group.  We meet in the local library and our leader is the author, Evelyn Hood whose 40th book was published last week.  She is an remarkable person who is very generous about sharing her time and experience with less experienced writers in her workshops.

The author of The Twilight Time, Karen Campbell, is another author Scottish writer. She is a graduate of the

prestigious Creative Writing Masters run by Glasgow University, and a proponent of Tartan Noir and the author of several other books in the crime genre now too.  Indeed,in 2009 Karen won Best New Scottish Writer at the Scottish Variety Awards.  Karen is a former police officer, so can claim to have worked the streets of Glasgow, Scotland. This, her debut novel, weaves personal insights and experiences to look at life behind the uniform. It also examines the choices women make in life. I have also been to workshops given by Karen and she is also very patient and generous with her time. Her novel, Proof of Life is also reviewed on this blog at https://bookreviewstoday.wordpress.com/2013/12/16/proof-of-life-…karen-campbell/

This is an excellent first novel.  It is about Anna Cameron, a new Sergeant in the Flexi Unit. On her first day in the new job she discovers she’ll be working with her ex, Jamie, who is now married and with a child. This throws her in at the deep end emotionally after years without him. 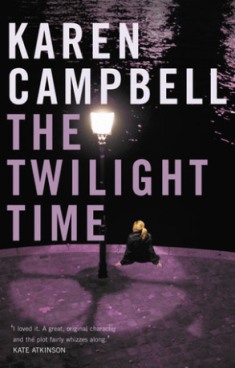 Anna is also plunged headlong into the underworld of Glasgow’s notorious Drag which is the haunt of working girls, drug dealers, and seedy men. Someone is cutting the faces of local prostitutes. Then an old man has been brutally killed. Racist violence is also on the rise.  In addition to this, Anna must deal with tensions and backstabbing within her own team.   The book is atmospheric, affecting but not for everybody. The Twilight Time is really quite graphically violent in places.

There’s a hefty dose of angst, personal instability, depression, obsession, resentment, dislike, mistrust, lack of understanding, and selfishness in just about every character in the book. Even the central character Anna, is far from perfect. To me this makes her interesting.  I like characters that are not too perfect, make mistakes and have bad days. However, Anna sticks with things, and cares about things.   I particularly liked the way that she cared about what happened to Ezra, a lonely old man who gets murdered.  It is an interesting part of the book when  the mystery of the death of Ezra comes to light.  It seems to be a racist plot.  It was also sad to be reminded that an old man could die, alone and mostly unforgotten and unremarked on.

The other case that is being pursued by Anna’s team is the carving up of prostitute’s faces. This is resolved well, although at points it does seem to disappear into personal stuff a bit. In the investigation there were some procedural twists and turns that I thought were a bit too detailed.  However, if you like crime novels and do not mind a bit of gore, I can recommend The Twilight Time to you.