Beneath the Bleeding by Val McDermid

Beneath the Bleeding is an ambitious novel, written on a grand scale.  It tackles pertinent social issues and is the fifth of McDermid’s novels that develops her two highly memorable characters: forensic profiler Tony Hill and his police ally DCI Carol Jordan. 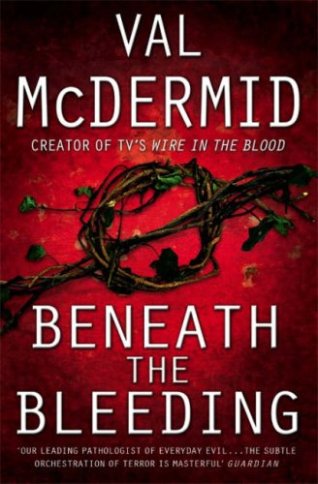 This book, is as disturbing as it is compulsively readable.  The author continues to add new levels to this psychological thriller — something that McDermid seems able to do in every new book.

The story starts when a star footballer has been murdered in the city of Bradfield. Shortly aftewards, an explosion rocks the town’s football stadium and wreaks mass carnage. In the current climate of fear regarding home-grown terrorism, it is inevitable that suspicion falls in this direction but DCI Jordan and her time must discover if that really is what is involved here.  It might be a bloody working out of some kind of revenge scenario against the football team.

The case is quite a different case from those that Tony Hill and Carol Jordan have previously been involved with, and the customary relationship  that swings between confrontation and admiration.  These are worked out with all the rigour that readers expect from McDermid.  This is an author who always has more fish to fry than the simple exigencies of the crime novel, and astringent commentaries on many aspects of British society are provocatively incorporated into her work but never at the expense of a forward moving narrative.   If you’re a fan of the Wire in the Blood TV series, you should do yourself a favour and read McDermid’s original novels.  These include Beneath the Bleeding.  I really enjoyed the book, and if you like crime novels, this is definitely worth a read.

Val McDermid is a Scottish crime writer, best known for the series of suspense novels starring her most famous creations, Dr. Tony Hill and DCI Carol Jordan.  She was born in Kirkcaldy, Fife, Scotland on 4th June 1955.  She was educated at Kirkcaldy High School and then she went on to St. Hilda’s College at the University of Oxford in England.  Among the awards she has won are the Cartier Dagger and the Barry Award for the Best British Crime Novel.