The Restraint of Beasts by Magnus Mills

Magnus Mills was born in Birmingham, England but brought up in Bristol.   He graduated with an economics degree from  Wolverhampton then started a masters degree at the University of Warwick he but dropped out before completion.

Between 1979 and 1986 Mills built high-tensile fences for a living, an experience he drew upon for his first novel, The Restraint of Beasts.   He had written a column for the London newspaper The Independent before becoming a novelist. 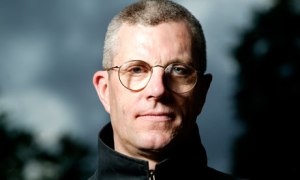 This book was short listed for the Booker Prize and the Whitbread First Novel Award in 1998.  It won the McKitterick Prize in 1999, and earned a rare jacket quote from reclusive author Thomas Pynchon, who called it “a demented, dead-pan comic wonder.” I cannot say I found it that much of a comic wonder, however, there are some smiles raised by it.

The story tells of a fence-builder who is given the job of foreman over a couple of co-workers whose typical days work is carried out at a very slow, lazy slog towards each evening in spent in the pub.  The group are barely competent and accident-prone. They have a string of irascible clients and an obsessive-compulsive boss.

There is also a persistent thread of English-Scottish dissension, but that never becomes more than a subtext.   Perhaps the book should be read as a more generic social critique, one in which attention to business and labour drains people of their capability of more activity.

I found the book mildly amusing from time to time, and becoming perhaps a bit more so as I grew more comfortable with the characters.  The story consistently avoids the expected and the outcome would be less conclusive than I thought it would be.  I would not seek out another book by this author, though.