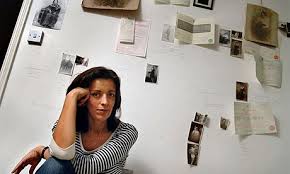 Louise Doughty is an English novelist, playwright and journalist who has a Romany background.  She was born in Melton Mowbray, 4 September 1963.  She attended the University of Leeds and  is an alumna of the University of East Anglia’s Creative Writing Course.

This story is narrated by two women, one of whom is Romany, and charts the fortunes of one English family over three generations as the 20th century rolls by. It is beautifully written, with sadness and humour in equal measure.

The book starts off in the late 1800s, it alternates in the storytelling from two women, Clementina and Rose.

Clementina, is the only child of a travelling family.  She falls pregnant as a teenager, unmarried and never revealing the identity of the father.   She has her son, Lijah, and they continue the travelling life.   When Lijah is about twenty they are stopping with other travellers at a farm to do some work.   The farmer’s step daughter, Rose, comes into their lives and Rose and Lijah run away to get married.

The story then follows the full stretch of Clementina and Rose’s lives, often repeating over various incidents, but told from each woman’s perspective, which always puts a different spin on it.   They really did loathed each other, but in the end they were incredibly close and could not do without one another.   With the utmost delicacy, Doughty interweaves their points of view and teases out their secrets until it is impossible not to sympathise with both.   Stone Cradle provides a fascinating insight into a neglected corner of English social history, but what is most impressive is the way this meticulous research comes roaring effortlessly to life in a timeless story of these two women who hate each other with a passion.  Clementina is such a fantastic little curiosity, in what she gets up to, the way she thinks and how she expresses herself.

Doughty’s novel convincingly brings to life the complexities of life for a family of travellers. She uses the occasional word of English Romanes to bring colour to the language of her characters, and while this could have jarred, it achieves the opposite effect of adding intrigue and authenticity.  Doughty based much of the story upon events from her own family history.

This was an absolutely fantastic read.  The writing and the story telling are excellent. I just loved this book.   It is a gripping, harrowing and moving saga.