The Little Stranger by Sarah Waters

I am not really very keen on ghost stories, but The Little Stranger by Sarah Waters was the reading for my book group this month.

The story is set in 1947. Britain is exhausted by victory, and neither the National Health Service nor the National Trust has yet come along to pick up the pieces.  The scars of war are fresh and great country houses are battered from military occupation, their parks having been dug over for vegetable plots. The civilian population is depressed by rationing, homelessness, post war gloom and austerity.

Dr Faraday is the narrator of the story.  He is a country GP practicing in Warwickshire, England in the area where he was born, to poor parents who sacrificed everything for his education.   He is unmarried and slouching into an impecunious, solitary middle age: he is apprehensive about the coming changes in medical practice and pessimistic about his future.  Many of his patients live in rural slums; he has never been taken up by the local gentry as he is awkwardly poised between the social classes.  Faraday is conscious that some of the boys with whom he was at school are now labourers.  The doctor grasped his opportunities, but the strain shows; he is unable to eradicate, within himself, the signs of his past struggles and his parents sacrifices. 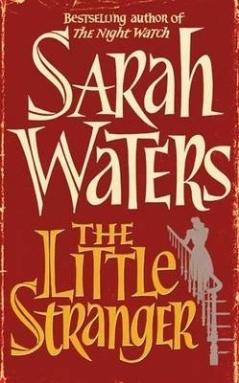 When he is called out to visit a patient at Hundreds Hall, Faraday thinks his luck has changed.   His mother had been a servant to the Ayres family.   As a little boy he had visited the hall on the occasion of an Empire Day fete and had eaten leftover jellies at the kitchen table while his mother helped with the washing-up.   Left alone for a moment in a corridor of the house, he had broken off a plaster acorn, and taken it home in his pocket.

This novel is a perverse hymn to decay, to the corrosive power of class resentment as well as the damage wrought by war. Hundreds Hall is crawling with blights and moulds; crumbling from subsidence and water damage.   Beetles knock behind panelling.   Weeds force themselves through stone.   The window panes are dim and warped; they reflect nothing truly.   Its corridors are dark, light spilling unexpectedly from open doors and the great dome above.

Also, the inhabitants are riddled with ambivalence, by self-doubt and are worn away by genteel, stifled frustration.   They speak the soothing language of upper-class good manners, but are unable to face their damaged selves, or contemplate their capacity for doing damage.

Faraday’s patient is not the lady of the house  it is Betty, a 14-year-old maid who is the only servant now employed in a house that once provided work for dozens.   She says she has abdominal pain; Faraday suspects she is malingering. Betty’s fear that something is deeply wrong in the house is ridiculed as the product of country ignorance. Dr Faraday and her employers regard Betty as being hardly on the human level.   After each episode Betty is summoned to mop up the blood and the broken glass, to carry buckets of water or to brew tea to calm the nerves of her social superiors.   Betty is inarticulate and gauche. She is not considered to have the sensibility to feel the higher types of terror.   No one offers Betty an explanation as gruesome events escalate.

Mrs Ayres is the lady of the house.  She is a woman living in the midst of decrepitude, well groomed but living with sagging sofas, peeling walls and threadbare rugs.   Her son Rod, in his early 20s, has come back from his war service with the RAF scarred and limping and with a legacy of “nervous trouble”.   Now he is trying to keep the house and estate going. He is selling land and before the end of the book, council houses will be built within sight of the hall.  Rod cannot climb stairs without pain so he combines bedroom and office in one large, squalid salon, sleeping amidst the overdue bills.

Faraday is not interested in the increasingly belligerent and depressed young master, but his sister Caroline, thick-legged, plain, graceless, bossy, and yet with a certain sexual allure.

Every ghost story needs a Dr Faraday, is blunt and literal with a sturdy sense of self.   Such a figure begins as the reader’s surrogate, the voice of scepticism.   However, I did not feel I could trust Faraday.  Perhaps our guide and mentor is dull-witted, complacent, perhaps even self-deceiving; I was turning the pages faster and faster.

The Little Stranger operates in the uneasy areas between the supernatural and the psycho-pathological, and it is territory in which the author moves with an air of ease.   One of the pleasures of the book is the way she combines spookiness with sharp social observation.   She is at home in a convincing postwar setting; however much we pity the family at Hundreds Hall, as their ancestral pile and their sanity collapse about them, Waters never lets us lose sight of their repulsive social attitudes.   It does seem, at one point, as if it is the spirit of snobbery that is haunting them.

I did feel, however, that the book was a bit too long.  It would have been an even better read if it had been more tightly written and two-thirds if the length.  However, if you enjoy ghost stories or social observation, this book is well worth a read.  However, I advise that you read it with the lights on!