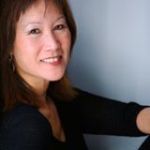 Tess Gerritsen MD was born June 12, 1953.  She is a Chinese-American novelist and retired physician.

In 1975, Gerritsen graduated from Stanford University with a BA in anthropology, intrigued by the ranges of human behaviour.  She went on to study medicine at the  University of California in San Francisco.   She received her medical degree in 1979 and started work as a physician in Hawaii.   It was  while she was on maternity leave, that Tess submitted a short story to a fiction contest in the magazine Honolulu.   She won first prize and she received $500!

As she used to be a doctor,  it comes as no great surprise that the medical aspects of her latest thriller are absolutely convincing: even if most of the action happens in outer space where few doctors have ever practised.

The book tells of Dr. Emma Watson and five other hand-picked astronauts are about to take part in the trip of a lifetime studying living creatures in space.  However, an alien life form found in the deepest crevices of the ocean floor, is accidentally brought aboard the shuttle Atlantis.   This mutated alien life form creates a complex and unidentified problem.  Soon the crew are suffering severe stomach pains, violent convulsions, and their eyes are bloodshot.

Gerritsen brilliantly describes life and the difficulties of treating sick people inside a space module.  her discription of  how the lack of gravity affects the process of taking blood and inserting a nasal tube made me gag involuntarily.   The writing is so adept.

Dr. Watson does her best, but her colleagues die off one by one and the people at NASA do not want to risk bringing the platform back to earth.   Only Emma’s husband, a doctor and astronaut himself, refuses to give up on her.

I had never read any of Tess Gerritsen’s books before.  She was recommended to me by a friend who worked as a scientist in the USA and UK before she retired.  I suspect those more knowledgeable in the sciences will read this book with better understanding than I did.  Nevertheless, I really enjoyed the book and will seek out more of Tess Gerritsen’s novels.  This book has since been made into a film starring Sandra Bullock, it is also well worth seeing. 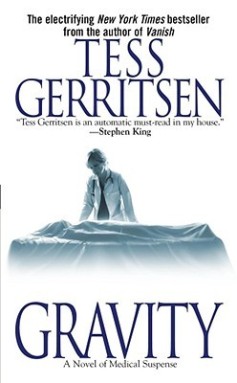