When this book was book of the month at my book group, I sighed.  Generally speaking I do not like books written as a series of letters.  I also try to avoid books that are collaborative, with more than one author.  However, this was the designated book and I knew Mary Ann Schaffer by reputation, I decided to make an exception.  For those of you not familiar with the name, Mary Ann Shaffer is an American writer, editor, librarian, and bookshop worker.

She was born on January 1, 1938 in Martinsburg, West Virginia.  She is noted for this work which was posthumously-published.  She became very ill during the writing process of “The Guernsey Literary and Potato Peel Pie Society” and died on February 1, 2008.  It was her niece, Annie Barrows who was responsible for the later revisions required by the editor.  Annie Barrows is also an American editor and author. She is best known for the Ivy and Bean series of children’s books, but she has written several other books for adult readers as well.  She was born in San Diego, California in 1962.

The book is set in January 1946 when London is emerging from the shadow of the Second World War, and writer Juliet Ashton is looking for a subject for her next book. She receives a letter from a man she’s never met, a native of the island of Guernsey, who has come across her name written inside a book by Charles Lamb, it is thus the subject she is to write about is introduced.

As Juliet and her new correspondent exchange letters, Juliet is drawn into the world of this man and his friends. The Guernsey Literary and Potato Peel Pie Society came into being  as an alibi when its members were discovered breaking curfew by the Germans occupying their island.  The Society boasts a charming, funny, deeply human cast of characters, from pig farmers to phrenologist who are united by a love of reading.

Juliet begins a remarkable correspondence with many of the society’s members, learning about their island, their taste in books, and the impact the recent German occupation has had on their lives. Captivated by their stories, she sets sail for Guernsey, and what she finds changes her forever.

The book is written with warmth and humour.  It is a celebration of the written word in all its guises, and of finding connection in the most surprising ways.  It may be a little syrupy for some tastes but it is a terrific feel-good novel and I highly recommend it. 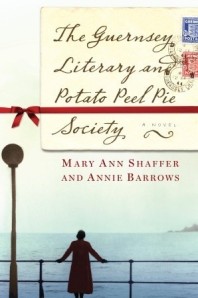