The Broker by John Grisham

John Grisham born on February 8, 1955 in Jonesboro, Arkansas, to a construction worker and a homemaker.    As a child he dreamt of being a professional baseball player.   He shifted ultimately majored in accounting at Mississippi State University.   Then, after graduating from law school at Ole Miss in 1981, he went on to practice law for nearly a decade in Southaven, specializing incriminal defence and personal injury litigation.   In 1983, he was elected to the state House of Representatives and served until 1990.

Before his name became synonymous with the modern legal thriller, he was working 60-70 hours a week at a small Southaven, Mississippi, law practice, squeezing in time before going to the office and during courtroom recesses to work on his hobby which was writing his first novel.

Grisham has great strengths as a writer.  He moves the plot along in a gripping, relentless fashion.  He also  makes the unbelievable believable.

In this book he builds a detailed back story and in this book his jumps back and forth in time.  I found this made the book  a bit difficult to follow in places.   The Broker is about Joel Backman.  He is a broker who has stumbled onto a conspiracy about a satellite surveillance system that can corrupt  and the he decides to try to sell this satellite to the highest bidder in the world to his advantage.   Backman, in his power broker heyday, has obtained secrets that compromise the world’s most sophisticated satellite surveillance system.

The government  incarcerates him for 20 years to make sure that the secret of the satellite does not get leaked out.  However,   in his final hours in the Oval Office, the outgoing President grants a controversial last-minute pardon to Joel Backman, this notorious Washington power broker who has spent the last six years of his 20 year sentence hidden away in a federal prison.   What no one knows is that the President issues the pardon only after receiving enormous pressure from the CIA.   The CIA ship him to Italy in a military cargo ship.  So Backman is quietly smuggled out of the USA, given a new name, a new identity, and a new home in Italy.   The CIA plan is that, eventually, after he has settled into his new life, the CIA will leak his whereabouts to the Israelis, the Russians, the Chinese, and the Saudis. Then the CIA will do what it does best: sit back and watch. The question is not whether Backman will survive : there is no chance of that.   The question the CIA needs answered is, who will kill him?

I found this book very exciting that this  man has just been released just to be killed what a plot in a book! In his new home in Italy and a  new identity, Backman has no friends besides his CIA friend and mentor Lugi and his Italian instructors.   Neverthe less, Backman was able to outwit many people in his new home of Italy and he was able to withstand whatever the government threw at him.  He has the ability to adapt to a new environment.

This book was so descriptive telling every detail that was necessary for you to get an enchanted feeling: just as if you was in Italy.  Grisham describes the smell of the food, the customs and how different the Italians are to Americans.  The Broker reflects many subjects in life.   The book talks about the power in government:  how it is twisted and how the world is now.   It also debates that not all that can be done is being done but the people in power are merely looking out for themselves. 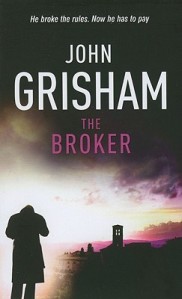