Losing My Virginity by Richard Branson

“Losing My Virginity: How I’ve Survived, Had Fun and Made a Fortune Doing Business My Way” This philosophy has allowed Sir Richard Branson, in little more than twenty-five years, to create many successful ventures. Richard Branson is a British business man. Richard Charles Nicholas Branson was born on July 18, 1950, in Surrey, England.

His father, Edward James Branson, worked as a barrister. His mother, Eve Branson, was employed as a flight attendant. Richard, who struggled with dyslexia, had a hard time with educational institutions. He nearly failed out of the all-boys Scaitcliffe School, which he attended until the age of 13. He then transferred to Stowe School, a boarding school in Stowe, Buckinghamshire, England.

Branson dropped out of school altogether at the age of 16 and started a youth-culture magazine called Student. The publication, run by students, for students. It sold $8,000 worth of advertising in its first edition, which was launched in 1966. The first run of 50,000 copies was disseminated for free, after Branson covered the costs with advertising.  By 1969, Branson was living in a London commune, surrounded by the British music and drug scene. It was during this time that Branson had the idea to begin a mail-order record company called Virgin to help fund his magazine efforts. The company performed modestly, but made Branson enough that he was able to expand his business venture, adding a record shop in Oxford Street, London.

With the success of the record shop, the high school drop-out was able to build a recording studio in 1972 in Oxfordshire, England. Since those early days, he has been involved in many business sectors: the airline business (Virgin Atlantic Airways), music (Virgin Records and V2), soft drinks (Virgin Cola),retail (Virgin Megastores), and almost a hundred others, ranging from financial services to bridal wear.   Branson has a track record second to none. 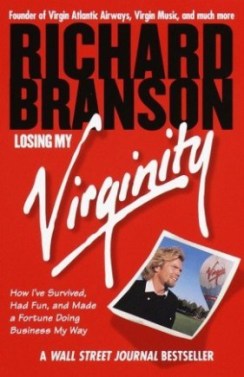 Losing My Virginity is the unusual autobiography of one of the great businessmen of our time. When Sir Richard Branson started his first business, he and his friends decided that “since we’re complete virgins at business, let’s call it just that: Virgin.” Since then, he has written his own “rules” for success.  He has created a group of companies with a global presence, but no central headquarters, no management hierarchy, and minimal bureaucracy.  It is a remarkable achievement.

Many of Sir Richard Branson’s companies airlines, retailing, and cola for example were started in the face of successful, well established competition. The experts said, “Don’t do it.” But Branson had other ideas and found opportunities in these markets where customers had been poorly served and where the competition had become complacent.

Sir Richard Branson gives his readers a new model for business.  He is a dynamic, hard working, successful entrepreneur who lives life to the full. In this book he reveals that family, friends, fun, and adventure are equally as important as business in his life. “Losing My Virginity” provides a portrait of a productive, balanced life, filled with rich and colourful stories:

circle the globe.  He tells how his fledgling company signed the Sex Pistols, Janet Jackson, the Rolling Stones, Boy George, and Phil Collins.  The tales of fighting back when British Airways took on Virgin Atlantic are legendary and he successfully sued this pillar of the British business establishment.  The decision to sell Virgin Records to save Virgin Atlantic is told so vividly.  Many other stories are too. “Losing My Virginity” is the ultimate tale of personal and business survival.  I found it fascinating.