At Risk by Patricia Cornwell

I really enjoyed this Patricia Cornwell book, At Risk.  Although it is a lot shorter than many of her books and her famous character, Dr Kay Scarpetta does not appear.  Nevertheless,  “At Risk”  is another of the author’s successes, although its brevity will disappoint some. 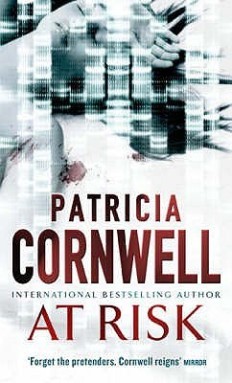 The book is based on a story of the same name serialised in The New York Times: Cornwell introduces a new central character in this book. She has a charismatic male police investigator at the centre of the narrative. The story takes the reader from the cool climes of Cambridge, Massachusetts, USA to the overbearing heat of Knoxville, Tennessee. Win Garano is handed a tricky assignment.  He is to investigate a murder case that is over two decades old.

District Attorney Monique Lamont is not concerned about the difficulties of the case.   She simply wants results for her own personal reasons.  Win is convinced that he has been saddled with a very low priority case, but quickly finds that there is much more to this old mystery than he thought.

Some very dangerous secrets are uncovered.  Win finds himself dealing with both the consequences of his investigation and Lamont’s ambition as he pursues a political prize.

Sometimes when Cornwell has moved away from the safe territory of the  Scarpetta stories, she has alienated some of her fan base. However, she is right to take chances like this in order to renew her inspiration. This fast-moving piece is a good read, even if it comes in at a rather shortish page count.  I really did enjoy At Risk.