The Venus Conspiracy by Michael Cordy

When I read the back cover of this book I was not sure that I would like The Venus Conspracy. However, my husband and I were on holiday and I had finished the other two books I had taken with me.  So there I was, hundreds of miles from home in the Al Garve in Portugal staying at Clube Humbria. The resort is reviewed at https://hotelandrestaurantreviews.wordpress.com/2013/03/29/clube-humbria-algrave-portugal/. ‎I had a book by an author I have never heard of and a book I don’t think I will like!  However, I did enjoy the book and far more than the premise suggested.

I have since discovered that Michael Cordy is a British writer who was born in Ghana and spent much of his childhood in Africa, India and Cyprus. He was educated in England at The King’s School in Canterbury and the universities of Leicester and Durham. He worked first in marketing and advertising, but later he gave up that career to write novels.

The story  is about a Professor, named, appropriately, Bacci, which means kisses in Italian.   He creates a love potion.   It causes complex sometimes temporary, sometimes permanent emotional changes in the people who take it.   The potion is powerful and dangerous.   The professor’s intentions behind the invention are benign but, when a villain steals the formula, he sets in motion a plan that will effect the world.   The race to prevent the evil use of the potion is on.

The idea sounds preposterous; but the story is tightly written and the action fast-paced.  The story spans the globe.   As the genre requires, the hero is handsome and noble, the heroine an intelligent, beautiful femme fatale.   There is also a cast of wicked villains.

Professor Bacci thinks a drug that makes people fall madly in love cannot be a bad thing.  He unlocks the biochemical key to falling in love, and develops a drug capable of creating emotions indistinguishable from the real thing.  He is determined that the world should benefit from his discovery.  However, when Bacci seeks funding and business advice, he turns to a private Swiss bank, owned by the secretive Kappel family.  Unknown to the professor,  Helmut Kappel, the leader of the banking family, sees love as a sickness.  He has a plan for abusing the drug’s power.   It is a cynical plot of breathtaking arrogance far removed from Bacci’s naive dream of spreading love around the world. 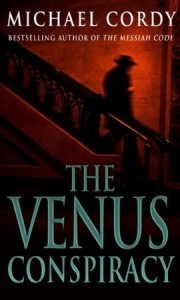 “The Venus Conspiracy” is an idea that could be ripped from the broadsheet headlines.  It is Michael Cordy’s story of a compelling future where even human emotions can be bought and where true love can be faked.  I did enjoy this book very much and I will definitely be seeking out Cordy for some more wonderful fast paced stories.