Port Mortuary is the eighteenth book by Patricia Cornwell featuring Dr Kay Scarpetta.  She might not be the warmest of heroines, but she is certainly one of the most compelling.  I usually enjoy Patricia Cornwell’s books and have read several of them, so I was pleased to find one that was new to me in our library.

Port Mortuary is written in the first person.  It is the first time Cornwell has done so for a long time.  In doing so she reveals unexpected secrets about Scarpetta’s past that go some way to explaining the detachment of the medical examiner.

Scarpetta is called home to Massachusetts, USA  after six months on a military airbase.  The body of a young man who apparently died of a heart attack begins to bleed in the morgue. Was he alive when he was shut in the cooler? As Scarpetta investigates his bizarre internal injuries, she begins to discover connections between his death and the shocking murder of a boy, killed in a most horrific way: nails were hammered into his head.  The tale is a real thriller with twists and turns. 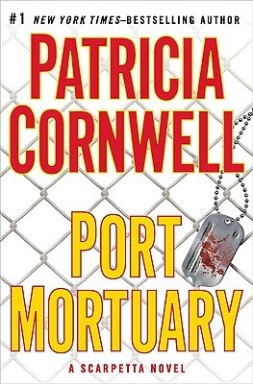 The hunt for the killer takes place over just a few days and Scarpetta becomes increasingly sleepless, panicked and exhausted.  The temperature drops and the snow falls.  Scarpetta becomes more and more suspicious of those around her.  Even her husband, Benton Wesley, her old friend Pete Marino and her niece Lucy appear to know things they aren’t telling her.

Cornwell presents us eventually with a psychotic, scary villain, and disturbing glimpses of robotic technology being developed for use in war.  The scariest bit of all is in an explanatory note to the readers at the start of the book: all of the robotic technology is real.

However, the real heart of this thriller lies in the insights it gives into the character of its heroine. She is accused of racism at the start of the novel by the angry mother of a dead black soldier, then begins circling obsessively around a moment from her youth when she performed an autopsy on two dead white girls in South Africa about which she feels very guilty.

It might lack the urgency, the thrills, of some of Cornwell’s novels but Port Mortuary is an interesting book.  I enjoyed it, although it did confuse me in bits. The story is really less about the chase than about why the chase is happening, still, it is worth a read. Another novel by Patricia Cornwell, Risk, is reviewed here: https://bookreviewstoday.info/2013/04/11/at-risk-by-patricia-cornwell/